Here's a not-so-tasty reminder of the damage bad trade deals can bring to the U.S. -- the production of Oreos are moving south of the border.

Starting soon, as a result of the firm’s drive for higher profits and lower wages, your Oreo Cookies will be made in Mexico, not Chicago. And it’s all thanks to NAFTA. 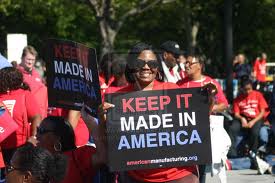 That’s the unpleasant news -- minus the NAFTA reference, of course --  that Mondelez, Inc., delivered to workers at its Southwest Side plant on Aug. 24. Bakery Confectionery and Tobacco Workers and Grain Millers (BCTGM) President David Durkee says approximately 600 workers -- the Oreo production line there -- would lose their jobs. Some other product lines for Mondelez, which used to be Kraft Foods, would stay open at the Chicago plant, its largest in the U.S.

In a letter to President Barack Obama, Durkee said Mondelez demanded $46 million in annual savings from the union workers. It was an “offer,” Durkee added, calculated to be rejected.

Mondelez basically wanted the Chicago cuts to not only boost its profits “but pay for the Mexican workers’ wages, too,” the union says. And it could demand the cuts and make the move, Durkee said, thanks to NAFTA, the 20-year-old controversial U.S.-Canada-Mexico “free trade” pact that has become a model for other such agreements.

BCTGM calculated that $46 million would equal wage and benefit cuts of $22-$29 an hour for the workers at the plant, where BCTGM Local 300 represents all 1,000-plus workers. That compares to $2 an hour Mondelez plans to pay workers in Salinas, Mexico, to produce Oreo cookies. The firm announced it will invest $130 million in what it calls “more efficient” production lines in Salinas.

NAFTA and other succeeding trade pacts, including the pending Trans-Pacific Partnership (TPP), trash U.S. workers, Durkee told Obama. The pacts promote “a pernicious corporate business model predicated on the maximization of profits and executive compensation through elimination of good middle-class jobs at U.S. factories concurrent with expansion of production in unregulated factories in very low-wage countries.”

Mondelez, Durkee noted, is a profitable $35 billion worldwide firm whose CEO earned $21 million in total compensation last year. Durkee asked Obama “to reach out to Mondelez” corporate leaders and “ask them to rescind their decision and create, not cut, U.S. middle-class jobs.”

It's because of business decisions like these that workers need to be wary of deals like the TPP. More jobs are sure the flee overseas if the pact is ultimately approved.

Posted by Teamster Power at 2:45 PM