Wisconsin Gov. Scott Walker declared a war on workers yesterday. But this time, he's going after all of America instead. 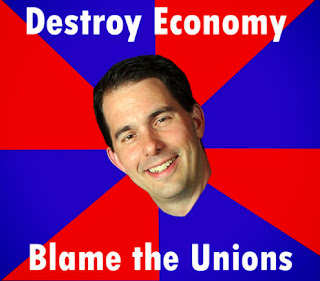 Walker, currently flailing in his attempt to capture the Republican presidential nomination, released a plan that would roll back worker rights and cut pay all for the benefit of massive corporations who could then pay less and make more. Instead of trying to address income inequality, the Wisconsin union buster is doubling down on it.


On the long list of changes Walker wants to make: enact national right-to-work legislation, dissolve federal unions and repeal President Obama's labor regulations. Walker would work with Congress to enact many of these changes, "or when appropriate, use the power of the executive to make commonsense changes to some of the workplace rules set by Washington," according to an advance copy of an eight-page proposal the campaign shared with reporters.

This doesn't come as a surprise. After all, Walker made his name by embracing a platform pushed by the billionaire industrialist Koch Brothers and the conservative American Legislative Exchange Council in Wisconsin to impose so-called RTW at the expense of everyday workers. So why not spread it nationwide?

Of course, the Teamsters have challenged all efforts to implement no-rights-at-work across the country. General President Jim Hoffa, in fact, just yesterday challenged an effort to override Missouri Gov. Jay Nixon's veto of the anti-worker legislation in that state. Although the piece speaks about that RTW bill specifically, change "Missouri" to "America" and the concerns are just as valid:


If the Legislature were to override Gov. Nixon's veto, it would be harder for workers to protect their wages and job security and their voice at the workplace would be silenced. Meanwhile, big business would get even more power at a time when CEO pay has grown to 373 times that of the average worker.

This effort needs to be called out for what it is -- a corporate-fueled attack on everyday people who are just trying to earn a living to support their families. It's part of a national effort being pushed by the same big companies and business executives who for years have boosted their profits by sending American jobs overseas. These out-of-state special interests are targeting Missouri to lower wages and cut benefits for workers so they can increase their profits even more.

Luckily for workers, it seems Walker is his own worst enemy in his run for the White House. At this point, it is unlikely he will get a chance to implement his plans himself. But workers shouldn't be naive. Other anti-worker politicians could grab hold of the mantle and punish everyday Americans themselves.

RTW is a ruse. It lowers pay and benefits. That's why workers need be aware of the issues and stay involved in the process. That way, workers win. Teamster Strong, America Stronger!
Posted by Teamster Power at 2:50 PM