The U.S. economic recovery is not everything it might seem to be at first blush. Anyone looking at the number of jobs created or the falling unemployment rate would certainly be encouraged by the nation's path forward since the end of the Great Recession, for instance. 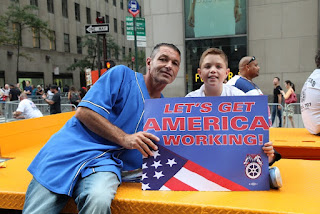 But when it comes to standard of living, however, the economy is not delivering. In nearly every state in the nation, the poverty rate remains higher than where it stood pre-recession. And despite the growth in jobs, poverty overall has remained persistent, according to new U.S. Census Bureau statistics this month.

Here's one thing we do know -- the jobs being created are paying low wages. They don't allow everyday Americans to earn enough to support their families. They are not going to put this country on a real path to economic recovery.
That's why the Teamster rolled out a plan earlier this month called Let's Get America Working that would create good-paying jobs by investing in infrastructure and vocational education. These are sustainable opportunities that will help not only workers, but U.S. businesses as well.
It's time for America to move beyond being a fast-food jobs nation. It must become a real jobs nation that provides employment that gives respect and dignity to workers.That's how this country will truly get back on track.
Posted by Teamster Power at 2:05 PM