Repatriated taxes will get America working

Banking titan Jamie Dimon shared his thoughts on how the rev up the American economy yesterday in an op-ed in The Wall Street Journal, saying a bipartisan group of lawmakers need to come together and tackle such issues as infrastructure investment and education. 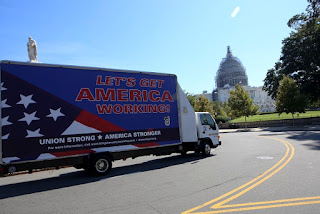 Dimon, despite his sordid history as CEO of J.P. Morgan Chase, makes a few good points. As the Teamsters have stressed in our new "Let's Get America Working" campaign, infrastructure is an ideal place to start. These jobs, unlike those in other sectors, can't be outsourced. They improve living standards for all Americans, including the men and women who help to repair and maintain roads, bridges, ports, airports and mass transit systems, along with those who earn a living transporting goods. And a vast majority of Americans use our transportation networks everyday.


Improving the outlook for U.S. workers isn’t about creating millions of minimum-wage jobs. It is about creating sustainable, skilled union employment that allows Americans to earn a fair wage with benefits that pay for housing and food on the table, makes education affordable and sustains a comfortable existence.

... By building roads, power plants and water treatment facilities, for instance, this nation can improve the fortunes of both working people and big business. And by focusing on such issues as worker rights, education and retirement security, policymakers can ensure the future is bright for all people.

The Teamsters also agree that partisanship needs to be checked at the door to accomplish these goals. These are issues that shouldn't be divided along party lines -- they are American values, something elected officials should all be able to support. Lawmakers must move beyond today's broken model of government to find solutions.

But Dimon gets it wrong on several fronts. Most significantly, his view that lousy trade deals like the 12-nation Trans-Pacific Partnership are going to help workers is not backed by facts. Quite frankly, it's the exact opposite of the truth. Millions of Americans have lost their good-paying jobs thanks to deals like NAFTA. U.S. workers can't compete when nations like Vietnam allow their workers to be paid as little as $4 a day.

And despite Dimon's assertions, American tax policy isn't hurting corporate America. In fact, it's taxpayers who are getting fleeced by big business. Companies are running up huge profits and paying little in taxes while everyday workers are forced into low-wage jobs. That's the real problem with today's economy.

If this country wants to get its economy situation straight, it needs to crack down on U.S. businesses and get what's rightful ours. Taxes on repatriated profits earned overseas could fund infrastructure and education improvements pushed by the Teamsters and Dimon.

Now that's how we make America stronger!
Posted by Teamster Power at 2:41 PM