Why do we need unions? The reasons are many, but a key statistic released last week by the Bureau of Labor Statistics (BLS) highlights an often-overlooked one -- to monitor workplace safety. 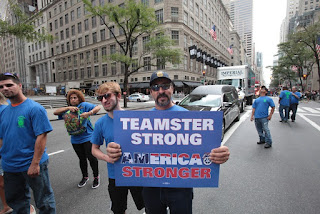 Too many people die at the workplace. The Labor Department reported that 4,679 workers were fatally injured on the job in 2014, up two percent from the previous year. The numbers were particularly grim for the workforce's oldest participants, who saw fatalities rise by nine percent. The 1,621 recorded deaths for those 55 and over is the highest since the agency began tracking such numbers in 1992.

Labor Secretary Tom Perez said the numbers are not acceptable:


Far too many people are still killed on the job -- 13 workers every day taken from their families tragically and unnecessarily. These numbers underscore the urgent need for employers to provide a safe workplace for their employees as the law requires.

Construction injuries – many of them falls – killed 874 workers last year, up from 828 the year before, BLS reported. The construction death rate is triple the death rate among all workers from occupational injuries, which was 3.3 per 100,000 last year, unchanged from 2013.

Some of the most economically vulnerable workers are also among groups with high on-the-job death numbers. Perez called 789 Hispanic-named workers who died on the job last year a figure that’s “unacceptably high.” And 827 of 2014’s dead workers were foreign-born.

Unions have a long history of overseeing safety concerns. That's because the Teamsters and others labor groups have workers’ interests at heart. Legislation like so-called right-to-work hampers their ability to do so. Workers don't feel safe to air their concerns when they don't have an advocate.

Everyday Americans deserve better. That's why the Teamsters and other unions continue their push to make workplace safety a reality.

Posted by Teamster Power at 1:15 PM