Public-sector employees have become a punching bag for anti-union forces who are trying to cripple the movement. But with the U.S. Supreme Court getting ready to consider a lawsuit that could allow workers to opt-out of paying union dues while still receiving representation, a new report shows just how much value union membership brings to workers' paychecks. 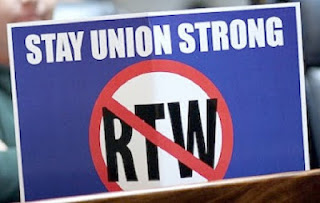 The Economic Policy Institute unveiled a document showing that if the court was to effectively institute so-called "right to work" for public sector jobs across the country, wages would likely fall far below what those in the private sector earn for the same work. Thus, if the court was to side with the plaintiffs in Friedrichs v. California Teachers Association, millions of workers would be hurt.

Jeffrey Keefe, a professor at Rutgers University who authored the report, says instituting a policy that would reduce wages makes no sense, taking a step that would worsen income inequality:


When states provide full collective-bargaining rights and permit the enforcement of provisions that allow unions to collect dues from all employees they represent, regardless of membership, unions can lessen and even eliminate this gap. This makes it possible for state and local governments to attract workers that might otherwise go to the private sector.

Sticking up for union jobs is essential because it paves the way to a middle-class lifestyle. The median union worker makes more than $200 more a week than non-union workers. That's why the Teamsters stressed the need for more union jobs in its "Let's Get America Working" campaign. Workers earning more doesn't just help their families, it helps the economy at large as well because they spend more.