Just a couple of years ago, getting the minimum wage raised above $10 an hour seemed like a fantasy. But lawmakers in more and more cities are hearing the cry of workers who live there, and the movement for fair wages blossomed. But it's not done yet. 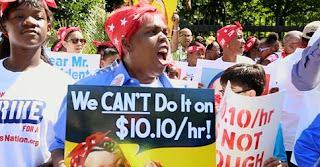 The Fairness Project, backed by unions, is pushing forward to help with 2016 ballot campaigns where voters themselves will get a chance to vote on whether to substantially raise the minimum wage more broadly. Initial efforts are being centered in California, Maine and Washington, D.C., but the group plans to get involved in other states as well.

As The Washington Post notes, the movement has history on its side:


According to the Ballot Initiative Strategy Center, minimum wage measures have been tried 20 times in 16 states since 1996, and all but two succeeded. The earlier victories came in waves, starting with the “living wage” movement in the 1990s. The campaigns even work in conservative states: in 2004, John Kerry lost Florida, but a minimum wage hike passed with 70 percent of the vote.

Even though those measures may not have made it through state legislatures, in combination, they do seem to add momentum for minimum wage hikes on the federal level — Congress responded with legislation in 1997 after a spate of ballot initiatives, and again in 2007 and 2008. Sometimes, just the credible threat of a ballot initiative can spur state houses to action where previously they had no interest, although the final result may end up watered down.

Most recently, in 2014, minimum wage measures passed in Arkansas, Alaska, Nebraska, and South Dakota. This latest wave is even more ambitious than the first and second, says Brian Kettenring, co-executive director of the Center for Popular Democracy — and it benefits from the narrative around inequality that arose during an economic recovery that delivered very little wage growth.

Of course, the movement continues elsewhere, and it should. In Syracuse, N.Y., for example, the mayor announced that the minimum wage for city employees would be raised to $15 an hour. And the Dallas City Council is currently debating whether to extend a minimum wage in excess of $10 an hour to contract workers in the city such as sanitation workers.

The Teamsters have continually stressed that raising wages increases respect and dignity for everyday Americans in the workplace. Higher wages is a central tenet of our new "Let's Get America Working" campaign because it improves lives for families and brings in more business. More money to spend means higher sales.

Joining a union is the best way to raise salaries. But for those without such an option, raising the minimum wage is a place to start. While too many lawmakers aren't acting on the issue, the public is. And the U.S. will benefit because of it.
Posted by Teamster Power at 2:40 PM