Congress needs our motivation to act on infrastructure!

America's infrastructure has seen better days. The Teamsters have stressed that point repeatedly as part of our "Let's Get America Working" (LGAW) campaign. But too many in Congress seem to be content not moving forward on a plan to rebuild, maintain and repair the nation's transportation network. 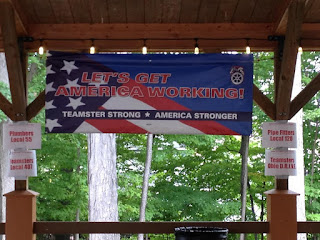 Since 2008, Congress has used more than $62 billion in taxpayer dollars to keep the Highway Trust Fund afloat, and it has been over a decade since lawmakers have passed a long-term highway bill. At the same time, the transportation system continues to crumble and the safety of those who work and travel along the roads and rails is being jeopardized.

If you spot decrepit examples of roads and bridges in your travels, please send them to teamsterphotos@gmail.com. It will help the union in our push to get Congress to focus on improving infrastructure that will help workers and businesses alike.

Infrastructure investment is key to creating new, better-paying jobs and getting the U.S. economy back on track. Let's show our elected officials why they should be focusing on the issue now!
Posted by Teamster Power at 3:05 PM