It’s been a week of surprises for Teamsters at Walt Disney World.

On Sunday, Local 385 members were busy putting together a special welcome for Local 891 member Bobby Mauffray and his family after learning in Teamster Magazine that they were “Disney fanatics” and "counting down the weeks" to surprise their three kids with a trip to Disney World. The Mauffray family lost their home 10 years ago during Hurricane Katrina, and during the interview for the anniversary story Bobby’s wife Marla – who claims to be the most Disney-obsessed Mauffray – revealed plans of a surprise trip to the Magic Kingdom. 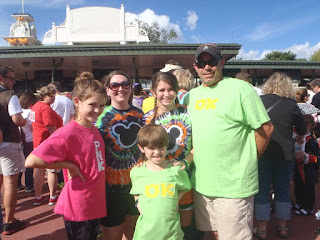 Business Agent Donna-Lynne Dalton worked behind the scenes, informing members of the more than 1,000-person unit at Local 385 to be on the lookout and give the family a warm Teamster welcome. Our union’s most animated unit, the Teamster character performers did not disappoint, says Bobby, thanking Local 385 members for taking the time to make his family’s surprise trip all the more magical:


They were incredible. It truly made our surprise all the more special, especially for the kids to spend time with their favorite characters. I want to thank Local 385 from the bottom of my heart. Marla and I are beyond grateful.

Meanwhile, 250 nonunion workers at Disney would be on the receiving end of a far more disturbing surprise when they learned they were being laid off, replaced by foreign labor.

The data workers who keep operating systems humming smoothly for Disney resorts and theme parks said they did not suspect trouble when they were recently summoned by management for an unexpected meeting to learn their jobs were being replaced with foreign labor. Even more troubling, they were told they would be spending the next three months training their replacements from India, who will be working under temporary visas and making significantly less each year:


I just couldn’t believe they could fly people in to sit at our desks and take over our jobs. It was so humiliating to train somebody else to take over your job. I still can’t grasp it.

As Teamster character performers brightened the day of a fellow Teamster, the Orlando Sentinel ran the story of Disney’s decision to lay off the 250 data workers. The cruel irony is not lost on Bobby Mauffray:


It’s crazy to think that while we were being greeted by Teamster character performers, hundreds of workers were being laid off. Like I said in the magazine — I can’t imagine where I’d be without a good-paying, union-backed job. I feel for them. I really do.