Do call it a comeback -- U.S. support for unions grows!

Americans' views of unions are on the upswing, according to a new Gallup poll, with nearly six in 10 now saying they see the worker organizations in a positive light. Those supporting unions grew five percent over the year before, and reached the highest level since 2008. 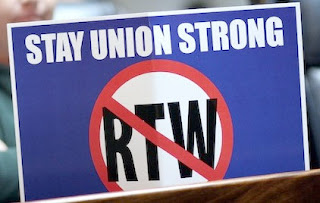 The news is particularly encouraging when digging deeper into the numbers. In particular. young adults polled are the strongest union backers, with 66 percent of those aged 18-to-34 supporting them. The message is coming through -- union membership equals better pay, better benefits and a better retirement!

As part of the report, Gallup stated:


With the economy continuing to do better than it did during the recession and the 2008 government bailout of two of the Big Three American auto companies -- for which unions' image may have suffered -- fading further into history, Americans' views of unions are largely restored to what they were six years ago. The solid majority approve of unions, and most would like to see unions' power strengthened, or at least maintained.

The poll was released as the labor movement continues its campaign to turn itself into a mass movement of workers, especially for workers – port truck drivers, fast food workers, retail workers, cabdrivers, “independent contractors” and more – most in need of workplace protection. Millions of those workers are unorganized, or, under current law, unorganizable.

Federal data shows 11 percent of U.S. workers are unionists, including one of every 14 in private industry. Press Associates reports that adding in the “free riders” -- workers whom right-to-work (RTW) laws order unions to represent without requiring payment for their services -- unions cover one of every eight U.S. workers. Some 17 percent of households have unionists in them, the Gallup poll says.

But there are still real concerns for workers. One is the continued push by some elected officials to get so-called RTW legislation through at the state and even county levels. These corporate apologists will stop at nothing to pay back their biggest supporters.

The Teamsters and other unions must continue to push out that truth -- that union jobs pay a better wage that allows workers to support their families. RTW, meanwhile, just further fills the wallets of big business.