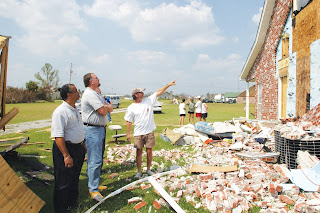 As we approach the 10-year anniversary of Hurricane Katrina, Teamster Nation looks back at the disaster and its aftermath, focusing on the unprecedented role played by Teamsters in relief efforts. We will be featuring stories throughout the week on the storm's impact on Teamster members and how the union has helped rebuild Gulf Coast communities.

Responding to emergencies of all kinds over the last century has created a strong, unique sense of pride and solidarity among all Teamster members. On the tenth anniversary of Hurricane Katrina’s landfall, the Teamsters Union is looking back on how the people of New Orleans and the Gulf Coast recovered and rebuilt their homes, businesses and lives.

Teamsters raised nearly $1.4 million in disaster relief funds during 2005, distributing aid to more than 2,200 affected members through caseloads of food, water and other supplies. The Teamsters also worked with retailers, employers and others to send truckloads of food and goods to the affected areas as Teamster tractor trailers came from Los Angeles, Oregon, Chicago, Montreal, Boston, New York and everywhere in between.

Going where no other organizations would, Teamster drivers delivered food, water and ice into devastated areas of the city. In New Orleans, where an estimated 80 percent of the city was under water (up to 20 feet deep in some places), Teamsters were moving heavy equipment into 9th Ward to repair breached levees while others were evacuating.

The Teamsters took a leading role in providing national logistical support, assisting the American Red Cross as it moved tons of supplies and equipment into the area. The union joined more than 200 members of labor organizations assisting in the Baton Rouge area alone.

As the labor liaison to the Red Cross, Teamster human rights commissioner and Joint Council 13 member Roy Gillespie assisted more than 600 shelters to reclaim generators, cots and beds, refrigerators, televisions and more. He believes Teamster oversight helped save the Red Cross more than $2 million in costs, not including the more than $4 million worth of aid equipment. Furthermore, Gillespie aided the Red Cross and FEMA in establishing a regional disaster preparedness strategy - which remains in place today - to avoid repeating errors and speed rescue and recovery:

By reviewing transportation invoices, Teamsters were able to stop price gouging of unscrupulous trucking companies. The Teamsters demonstrated how the Red Cross could trim volunteer time and expenses through smarter pick-up and delivery patterns.

Thousands of labor members participated in relief efforts throughout the region. Nationally, nearly $3.6 billion in cash and in-kind services have been donated to aid Gulf Coast hurricane victims, including more than $1 billion from labor unions to build affordable housing, spur economic development and create union jobs.

Time and time again, the resilience of the Teamster spirit appears in the face of tragedy. As we look back this week on the events of Hurricane Katrina, let us remember the courage and compassion of affected members and the strength of our union.
Posted by Teamster Power at 2:23 PM