Court ruling on Texas voter suppression is a positive step

Texas lawmakers tried to silence the voices of thousands of their residents at the voting booth. They've created rules that disproportionately impeded minorities, poor, elderly and young people. But last week a federal appeals court let the state know its voter suppression efforts went too far. 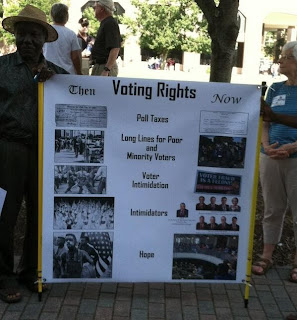 The Lone Star State jumped quickly to alter its rules after the U.S. Supreme Court issued a ruling in 2013 that curtailed enforcement of the Voting Rights Act of 1965. Even though experts have repeatedly stated that illegal voting is an insignificant issue trumped up by elected officials with their own political agendas, the Texas Legislature decided to disenfranchise some 600,000 people in the state anyway.

As The New York Times explained:


The case is one of a few across the country that are being closely watched in legal circles after a 2013 Supreme Court decision that blocked the voting act’s most potent enforcement tool, federal oversight of election laws in numerous states, including Texas, with histories of racial discrimination.

While the federal act still bans laws that suppress minority voting, it has been uncertain exactly what kinds of measures cross the legal line since that Supreme Court ruling.

The Texas ID law is one of the strictest of its kind in the country. It requires voters to bring a government-issued photo ID to the polls. Accepted forms of identification include a driver’s license, a United States passport, a concealed-handgun license and an election identification certificate issued by the State Department of Public Safety.

Another case is currently being heard in federal court in North Carolina, where state lawmakers also instituted draconian voting requirements against their own residents. Plaintiffs in North Carolina NAACP v. McCrory are rightfully questioning the trimming or eliminating measures that had been adopted over the previous 15 years in an effort to help boost electoral participation by minority and younger voters in North Carolina.

The Texas ruling is a step in the right direction, but is still far from settled given that a lower court judge will be tasked with deciding whether the state "acted with discriminatory purpose." What is truly required is a process that allows all qualified voters to go to the polls and carry out their constitutional rights, instead of letting lawmakers try to monkey wrench the proceedings.

This month marks the 50th anniversary of the Voting Rights Act. Our elected officials shouldn't be making a mockery of it.
Posted by Teamster Power at 1:32 PM