Anti-union forces pushing so-called right-to-work (RTW) legislation from state to state often tout the measure as one that will boost business creation. The thinking is RTW boosts business creation by cutting wages. 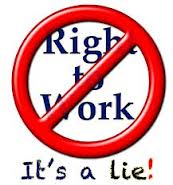 But that's just not the case, according to new U.S. Census Bureau data. It shows that in the latest numbers available, the top two states for jobs creation nationally were Missouri and Kentucky, states that currently allow collective bargaining but are being targeted by the corporate class and their legislative friends to make them RTW.

Missouri Gov. Jay Nixon rejected RTW earlier this year and the Legislature could not overturn his veto. He said the statistics show his state is on the right path:


Small businesses are the engines of our economy, and that’s why we’ve worked hard to help entrepreneurs turn cutting-edge ideas into high-paying jobs for Missourians. This report -- showing Missouri is not only bucking the national trend, but leading the country in new business creation -- is proof positive that our efforts are paying off in a big way.

Business creation increased in 2013 by 16.7 percent. That was followed by Kentucky at 6.1 percent. An additional 1,293 businesses were created in the Show Me State than the previous year, while the Blue Grass State created 251 more than in 2012.

However, only three right-to-work states – Nevada, Arizona and Mississippi – saw any kind of new business growth. Mississippi and Arizona grew less than half a percentage point, while Nevada, at 4.25 percent, lagged far behind Missouri. The other eight growing states, led by Missouri and Kentucky, were non-RTW.


Right-to-work doesn’t spur new business development. Business is created through innovation and workers earning a decent wage, which they can then invest in the economy.