The future for workers on the job could be shaped significantly by a spate of cases set to be considered by the U.S. Supreme Court during its current term. And it is something more everyday Americans need to be aware of and consider. 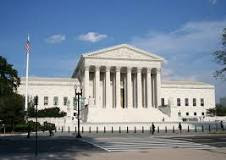 Already, one high court decision is being lauded by the Teamsters. The justices this week denied the petition of Amerijet International, Inc., which sought to appeal a federal appeals court ruling that said worker disputes must be arbitrated under a collective bargaining agreement regardless of whether it occurred outside of the U.S.

The case originated from the dismissal by the cargo airline of a Teamster crew member while he was flying to Trinidad and Tobago. Capt. David Bourne, Director of the Teamsters Airline Division, said the justices made the right call:


It comes as no surprise that the Supreme Court would refuse to hear this case, and in doing so, uphold the Eleventh Circuit Court's reasoning that this lawsuit is without merit. The lawsuit by Amerijet is unnecessary and a blatant abuse of the legal process in an effort to circumvent the legally established standards of labor law.

But that's far from the only hurdle the Teamsters and other unions could face in front of the high court. At the top of the list is agency-fee case Friedrichs v. California Teachers Association. As has been mentioned here previously, if the court was to effectively institute so-called "right to work" for public sector jobs across the country, wages would likely fall far below what those in the private sector earn for the same work.

Meanwhile, two other cases warrant mentioning. The first case arose Nov. 10, when the justices heard a confused class-action dispute involving computing how much money Tyson Foods workers lost. The firm did not pay 3,300 of them at its Storm Lake, Iowa, plant for mandatory time spent putting on and taking off protective gear, such as steel aprons, goggles and heavy work boots.

As part of Tyson Foods v. Peg Bouaphakeo et al, the AFL-CIO, Chicago-based pro-worker Interfaith Worker Justice and the National Employment Law Project filed friend-of-the-court briefs supporting the Tyson workers. The IWJ-NELP brief told the justices that letting Tyson get away with its behavior would reward employers for breaking the law by not keeping accurate records of time their workers toiled.

The federation said the case is important to all workers covered by the Fair Labor Standards Act – the wage and overtime law – who are forced to sue when they don’t get paid.

And justices will hear arguments on Nov. 30 on USPS whistleblower Marvin Green’s case. Green, who is African-American, says he was “constructively discharged” – in essence, forced to quit, which is illegal under labor law – after he filed a whistleblower complaint in 2009.

His complaint arose out of a racial job discrimination claim after he sought a supervisory post in Englewood, Colo. He was turned down, because, he told federal equal employment officials, of his race. USPS later suspended Green for allegedly delaying the mail – a false charge – and the harassment and pressure forced him to quit.

The court must decide how long a whistleblower such as Green has to sue. The Postal Service argues that whistleblowers have 45 days to sue from the time the agency committed the offense – if it did. Green says the time starts from the day he was forced to quit.