The U.S. economic recovery is not what it seems. Yes, it is clear that the unemployment rate has fallen dramatically since the Great Recession ended. But the benefits that usually follow such a change, like wage hikes for everyday Americans, have been much harder to find. 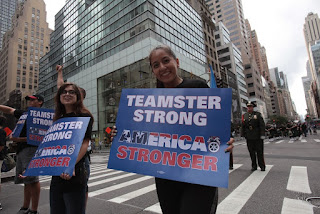 In fact, low- and middle-income earners are struggling just to reach their salary levels before the recession. Nearly 15 percent of Americans lived in poverty last year, and the household median income hasn't budged in recent years. Why is that? There are a multitude of reasons.


In fact, the labor market is a lot softer than a 5.1 percent jobless rate would indicate. For one thing, the percentage of Americans who are working has fallen considerably since the recession began. This disappearance of several million workers — as labor force dropouts they are not factored into the jobless rate — has meant continued labor market weakness, which goes far to explain why wage increases remain so elusive. End of story, many economists say.

But work force experts assert that economists ignore many other factors that help explain America’s stubborn wage stagnation. Outsourcing, offshoring and imports exert a steady downward tug on wages. Labor unions have lost considerable muscle. Many employers have embraced pay-for-performance policies that often mean nice bonuses for the few instead of across-the-board raises for the many.

The Teamsters have been sticking up for workers on this issue for years, and renewed that push as part of our "Let's Get America Working" platform rolled out in September. Finally, it seems others are beginning to take notice as well. Income inequality is becoming rampant in this country. But how do we overcome it?

It begins by having Congress reject lousy trade deals like the Trans-Pacific Partnership, which would ship thousands of jobs overseas and reduces the wages for many that are left behind. Elected officials also need to invest in infrastructure, which in turn will create good-paying jobs. And they must allow workers to organize for more power and fairness on the job.

Lawmakers can no longer turn a blind eye to the nation's workers. They need to be recognized and represented. That means approving policies that help them, not just big business.
Posted by Teamster Power at 2:26 PM