New Year's Day brought new pro-worker state and local laws into effect, as past worker activism at those levels provided an alternative to gridlock and anti-worker attitudes in the GOP-run Congress in Washington. 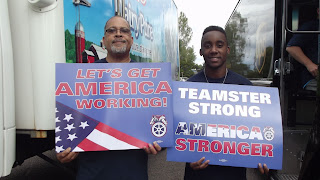 And it wasn't just minimum wage laws, either. Data compiled by the National Partnership for Women and Families show a wide range of family-friendly and pro-worker legislation either took effect on New Year's Day or will take effect this year, on top of a host of new laws that began in 2015.


We expect the progress to continue, but our nation still has a long way to go to ensure that hardworking people aren’t left struggling when illness strikes or new children arrive, or because we have failed to eradicate pay and pregnancy discrimination.


While not in NPWF's chart, the Fight for 15 movement produced legislative and bargaining successes for low-wage workers in New York State and New York City, Massachusetts, Minnesota and elsewhere.

The union-backed movement campaigns for $15 an hour as a living wage and the right to unionize without employer harassment, intimidation, spying, firing and labor law-breaking. Some 42 percent of all U.S. workers earn less than $15 hourly, data shows.

Posted by Teamster Power at 1:07 PM