Fight for 15 strikes D.C. as Sanders calls for $15 minimum wage 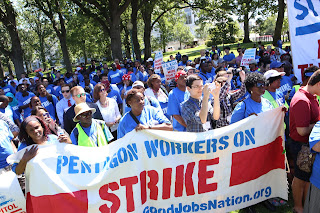 Addressing the crowd at a rally in front of the Capitol, Sen. Bernie Sanders (I-Vt.) announced that he and his colleagues introduced a bill today to raise the federal minimum wage to $15 an hour:


If you work 40 hours a week, you have the right not to live in poverty. The current federal minimum wage is a starvation wage. Because of you, the workers, and actions like this, states and cities are realizing we need the minimum wage to be a living wage. And it's time for the federal government to do the same.

Federal contract workers from the Pentagon, the Reagan Building, the Capitol and other locations participated in today's strike. They were joined by Sanders as well as Rep. Keith Ellison (D-Minn.), Del. Eleanor Holmes Norton (D-D.C.) and local leaders from Los Angeles and San Francisco, where the minimum wage was recently increased.

Sontia Bailey, who works at the Capitol, told the crowd why she went on strike:


I'm on strike today because I'm paid so little I had to get a second job. I work 70 hours a week and KFC pays me more than the government does.

Workers also heard from Charles Gladden, a Senate cafeteria worker who is homeless thanks to poverty wages:


I'm striking again today because workers shouldn't have to rely on charity to survive. We work full time and shouldn't need public aid to get by.

Today's strike was supported by union members in DC and organized by Good Jobs Nation, which has been pushing for President Obama to sign executive orders granting living wages and union rights to low-wage workers subcontracted by the federal government.

With some two million low-wage jobs supported by the government, organizers say Obama can raise millions out of poverty with the stroke of a pen. Last year he signed an executive order raising the minimum wage for federal contract workers to $10.10, still a far cry from what workers need.

Teamsters and the labor movement stand with the Fight for 15 because we know this is not just about McDonald's and Walmart. Wages for all workers have not kept up with rising costs of living and increased worker productivity. The result is growing income inequality between corporate bosses and the rest of us.

To raise wages for all workers, we have to start at the base. That means standing in solidarity with low-wage workers who are putting their jobs on the line for living wages in America.
Posted by Teamster Power at 2:19 PM