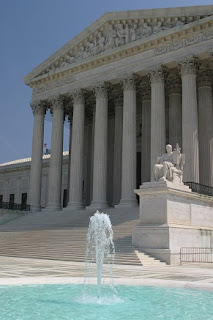 The Teamsters and other unions have helped build the middle class by negotiating for fair wages. But the corporate class and its allies are doing all they can to tear that down. And a Supreme Court case slated to be heard in the coming months could help anti-union forces reach their goal.

Public sector unions are the target of Friedrichs v. California Teachers Association, where a handful or public school teachers are suing the state's teachers union affiliate saying they shouldn't have to pay union dues. This, of course, even though they get the full benefit of the union hammering out a contract and representing them.


At issue is the court’s 1977 precedent in Abood vs. Detroit Board of Education, which today allows government worker unions in California and 20 other states to collect “fair share” fees to cover the costs of collective bargaining, even from employees who do not join or support the union.

Though the high court has said workers cannot be required to pay for a union’s political activities, it has concluded that they should contribute something toward a union’s cost of negotiating better wages and benefits for everyone.

The court’s conservatives, particularly Justice Samuel A. Alito Jr., have long questioned whether these forced fees in the public sector violate free speech because they require employees to support a union they may oppose.

While any ruling wouldn't affect private sector unions because only the government is required to abide by the First Amendment, its effect could be substantial nonetheless. The Teamsters represent more than 260,000 public sector workers, and millions are represented by other unions.

Representatives from the NEA, AFT, AFSCME, SEIU and the California Teachers Association said there is no reason the freedom of public workers to advocate for better services and communities should be curtailed as part of this case:


We are disappointed that at a time when big corporations and the wealthy few are rewriting the rules in their favor, knocking American families and our entire economy off-balance, the Supreme Court has chosen to take a case that threatens the fundamental promise of America—that if you work hard and play by the rules you should be able to provide for your family and live a decent life.

Government employees are not the enemy. They are just hardworking Americans doing what they can to keep a roof over their head and food on the table. Powerful interests are trying to demagogue these workers for their own political gain. Workers represented by unions shouldn't lose one of their only vehicles they have to fight for their rights.
Posted by Teamster Power at 2:52 PM