Hundreds of Teamsters converge on Washington for historic march 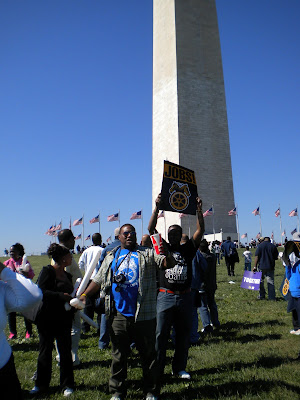 Hundreds of Teamsters came from all across America today to join in a historic march for jobs, justice and education. They came in busloads and they came by themselves; they came from as close as Washington, D.C., and as far away as California. And they carried big black and gold signs with one unmistakable message: JOBS!
Close to 200,000 people rallied for policies that put people before Wall Street. They were workers, students, environmentalists, clergy, civil rights activists and retirees. They didn't have an entire television network and conservative personality promoting the event. But organizers felt they made themselves heard.
Here's the statement from One Nation Working Together:
"As of 3:00 p.m., an estimated 175,000+ Americans -- representing all 50 states and our country's great diversity -- joined together at the Lincoln Memorial to reclaim the American dream and raise their voices for jobs, justice and public education."
One Nation described the march as "an important moment in the progressive movement."
Here's what Teamsters General President Jim Hoffa had to say:
"The Teamsters aren't afraid to get involved. We believe every working person in America should have a good job if he wants one. That's what this is all about.
"We've moved too far away from the dream that anyone who works hard and obeys the rules can live a good and decent life. We need to reclaim that dream."
Posted by Teamster Power at 5:47 PM