Occupy is starting to work 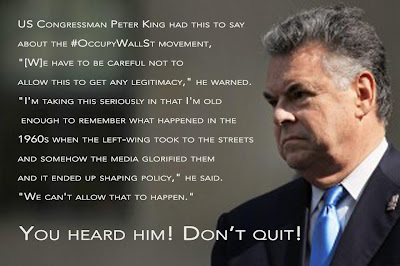 Above is one piece of evidence that the rapidly growing "Occupy" movement is starting to work.

Here's another: The 1% is starting to use agent provocateurs to discredit the movement.

firedoglake has the story about the American Spectator editor who deliberately provoked trouble at a protest in Washington, D.C., yesterday. Photos and videos show a confrontation in the lobby of the National Air and Space Museum, and the Museum’s security forces pepper-spraying people outside.


It appears that one of the two in the confrontation with the security officer is Patrick Howley, Assistant Editor of The American Spectator...

Immediately after the incident began hitting the newswires Howley published a “Breaking News” story with The American Spectator online in which he reveals that he had consciously infiltrated the group on Friday with the intent to discredit the movement. He states that “as far as anyone knew I was part of this cause — a cause that I had infiltrated the day before in order to mock and undermine in the pages of The American Spectator — and I wasn’t giving up before I had my story...”

According to Howley’s story he joined the group in its march toward the Air and Space Museum but the protesters on the march were unwilling to be confrontational. He states “they lack the nerve to confront authority. From estimates within the protest, only ten people were pepper-sprayed, and as far as I could tell I was the only one who got inside.”...

“I strained to glance behind me at the dozens of protesters I was sure were backing me up, and then I got hit again, this time with a cold realization: I was the only one who had made it through the doors."


...these admissions should not be taken lightly or ignored. As a result of Howley’s activities a large number of people were subjected to pepper-spray attacks including journalists and tourists who had nothing to do with the protest. Given the negative light that the press is attempting to spin this incident with regard to the ongoing occupations, from Wall Street and D.C. and now spreading to Main Streets across the country, the presence and admitted activities of this self-proclaimed agent provacateur should be brought to the attention of federal law enforcement officials.

Posted by Teamster Power at 1:10 PM