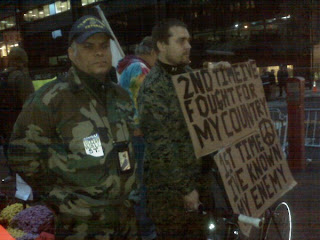 Retired U.S. Marines joined the encampment on Wall Street as the movement spreads to 160 cities in the U.S. and overseas.

The occupation of Lower Manhattan continues into its third week with its own newspaper. Nobel Laureate Joseph Stiglitz, author of "Globalization and Its Discontents," stopped by on Sunday and said there are too many regulations stopping democracy, and not enough regulations stopping Wall Street from misbehaving.


Protesters speaking out against corporate greed and other issues in New York City are dressing as corporate zombies and greeting Wall Street workers as they head into the office.
Patrick Bruner, a spokesman for the group, says Occupy Wall Street demonstrators are being urged to dress in business wear with white faces and blood, and will march while eating monopoly money. He says financial workers should see them "reflecting the metaphor of their actions."

Hundreds marched in Los Angeles over the weekend and some slept on the pavement outside of City Hall, according to the Los Angeles Times.
Occupy Denver and Occupy Chicago have been going on for 10 days. firedoglake offers this update from Occupy Denver:


﻿ ﻿ I was surprised when I went downtown today to learn that the Occupy Denver rally has been going on for 10 days. Surprised because according to my local news, there is no such thing as ‘Occupy’ anything.

What does make the news is that legislators – Democrats and Republicans – just voted to have 1.7 million dollars worth of gold re-plated on the Capitol’s Dome. It is the clearest example of what one 99 percenter described as a literal metaphor of the phrase

Predictably, the Mainstream Media's reporting on the movement is of the dismissive "they want all kinds of things" variety. Here's CNN:


The lack of coherent message has not stopped similar efforts from popping up elsewhere in the United States. 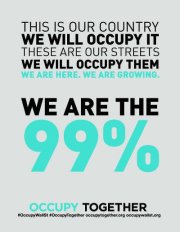 All last week across the media landscape, in pod, blog, flat-screen, and crunkly old newsprint columns, fatuous professional observers complained that the Occupy Wall Street marchers "have no clear agenda" or "can't articulate their positions." What impertinent horseshit. I saw a statement on one OWSer's sign that said it all:

What part of that is unclear to interlocutors of what we called "the establishment" back in the day?

If you want to help the OWSers, click here.
Posted by Teamster Power at 2:00 PM