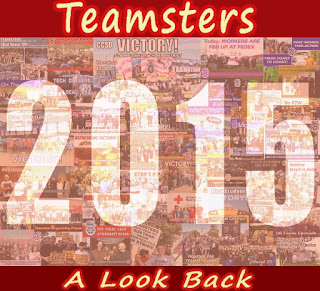 This year has been a big one for the Teamsters union. Historic organizing victories, monumental contract wins, ongoing legislative battles, and the fight against job-killing trade deals filled up the calendar throughout 2015. Rallies and strikes demonstrated the power of Teamster solidarity over the months.

As we close out the year and look forward to another year of progress for Teamster power in 2016, we look back at some of the important moments of 2015 for our union. We could not possibly mention every organizing victory and action that took place this year, but here (in no particular order) are some highlights:


Wow - what a year! And that's not even covering everything that has happened at various conferences, locals, joint councils, and individual shops around the country.

Teamsters continued facing challenges head on and winning this year. And we're ready to keep up the fight in 2016.
Posted by Teamster Power at 10:00 AM