Some in Congress set sights on union movement

Anti-union lawmakers are at it again. Not satisfied with ever-growing income inequality in the U.S. and huge corporate profits, several members of Congress are looking to further squeeze hardworking Americans by making it harder to organize and easier to shut unions down. 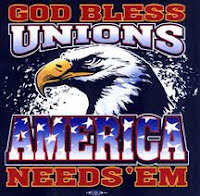 The Hill describes the effort as a retread of previous attempts to curtail union activity, including the ability to make political donations:


The bill is the latest shot fired in the bitter battle between the Obama administration and Republicans over labor policy. Hatch introduced the legislation in 2012, but to little avail. With Republicans now in control of the Senate, he's hoping for more success this time around.

It boggles the mind what these lawmakers are trying to do with such efforts. They always start by saying they're not against unions, but such efforts would gut them by making them poor and powerless, thus rendering them obsolete. Of course, that is the real plan behind such legislation.

Need proof of what the job market looks like when union membership is driven down? Head south to America's Sunbelt, and you will find a virulent strain of anti-unionism led by state and local leaders even in the wake of falling wages. Companies may have relocated there, but there not driving up income, only their own profits.

Unfortunately, some in the Midwest have bought into the big business hype, as The American Prospect outlines:


In the last three years, the Republican governors and legislatures of such onetime union bastions as Michigan, Indiana, and Wisconsin have joined the South in enacting “right to work” laws intended to reduce union membership. Since these laws cover only private-sector unions, and thus have no effect on the labor costs of government employees, the Republicans’ initial motivation was almost entirely political: Diminishing unions weakened institutions that generally campaigned for Democrats. But in recent months, bills to lower wages for construction workers on public projects have been moving through the legislatures in those three states, and the Michigan legislature has passed a bill forbidding cities from setting their own minimum-wage standards—all measures designed to hit workers’ pocketbooks. Moreover, laws designed to depress minority, millennial, and Democratic voting by requiring voters to present particular kinds of photo identification have been enacted not only by eight of the eleven once-Confederate states, but by Indiana, Michigan, and Wisconsin as well. Like the pre-1861 slaveholding elites, today’s Republicans appear increasingly dedicated to Southernizing the North.

Workers and elected officials shouldn't be fooled by these efforts. RTW and this latest congressional effort are frauds. They drive down wages for everyday Americans. Union jobs pay $200 more a week on average. When unions are strong, America is stronger.
Posted by Teamster Power at 2:03 PM