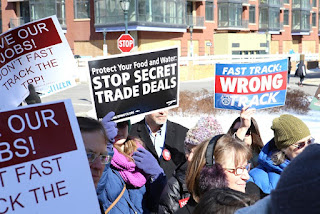 The House's overwhelming bipartisan rejection of fast track on Friday was a victory for all workers and a sign of the Teamsters' power to effect change when members of this union and our allies come together to challenge poor policy. But brothers and sisters, we're not done yet.

The Teamsters would like to thank all lawmakers who stood with the people in that important vote. Pro-fast track lawmakers, however, are likely to pull out every procedural trick in the book to overturn it. That could mean taking another vote on Trade Adjustment Assistance (TAA) as early as tomorrow. So that's why those standing up for hardworking Americans can't rest. Not yet, anyway.


The Teamsters and others who stand with American families must remain resolute. Corporate cronies are likely to try to get TAA and fast track through the House again as soon as [this] week. Workers’ voices need to continue to be heard on Capitol Hill.

TAA, which was legislatively linked to fast track by trade proponents in an effort to ease passage, blew up in their faces. And rightfully so. Fast track is unpopular for good reason -- it will ship American jobs overseas and threaten our food and water. Why should lawmakers approve worker training through TAA when they can vote to ensure workers won't lose their jobs from deals like the Trans-Pacific Partnership (TPP) in the first place?

House members should again reject TAA for the same reasons they did last week. The measure doesn't help public sector workers who could lose their jobs due to trade and it doesn't provide enough funding for training. TAA shouldn't be used as a bargaining chip to provide cover for continuing the current failed trade model.