Everyday Americans are facing a real battle keeping their heads above water financially. While unemployment continues to fall, incomes aren't rising for most workers. So it is particularly troublesome that the Supreme Court seems to be setting its sites on lowering incomes for thousands of public sector employees. 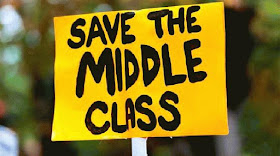 On Monday, the nation's highest court heard arguments why several California public school teachers don't think they should have to pay reduced fees that cover collective bargaining costs of their contracts. Those fees, mind you, are not used for political donations. But no matter, their attorney said it's all political and violates the the First Amendment rights of plaintiffs in Friedrich v. California Teachers Association.


Their burden of justification is much higher, because they can’t possibly show that abolition of the agency fees would lead to demise of unions.

Of course, that's exactly what it would do, and why the plaintiffs brought the case in the first place. And the Supreme Court appears ready to side with them, according to numerous media reports. As columnist Dana Milbank wrote in The Washington Post:


The huge political consequences of the case were unstated in the chamber, but the argument was at times as partisan as a debate on the House floor. Carvin frequently interrupted and talked over the three female justices — classic “mansplaining,” as Slate’s Dahlia Lithwick observed from the press seats. Carvin referred to the other side’s argument as the “so-called opposition” and pronounced Justice Sonia Sotomayor’s surname as “Soto-my-ear.” At one point he quipped that he has a First Amendment right not to join the American Bar Association, “because virtually every word out of their mouth I disagree with.” Justice Samuel Alito guffawed.

The argument was mostly for show, because there was little doubt the 1977 Abood decision will go down. This will make it easier for public-sector workers who benefit from collective bargaining but who don’t want to be in unions to avoid paying fees to the union, even for nonpolitical functions. Union finances will be further drained at a time when labor is historically weak.

Hard-working Americans deserve more than to be shunted to the side by this nation's government. But that is exactly what will happen if the high court rules with the plaintiffs in this case. Union membership will likely further decline, wages will fall and fewer and fewer workers will have access to quality health care and retirement benefits.

A recent study showed that that a reduction in union membership was responsible for more than a third of the 7.6 percent decrease in the share of workers in the middle class between 1984 and 2014. That's what's at stake with this decision.

The Teamsters and workers can't change the decision of the Supreme Court. But both can counteract any such a ruling by continuing to organize and pushing our lawmakers for policies that benefit workers. That why the Teamsters unveiled their "Let's Get America Working" platform last year and why it will continue to fight like hell to get it implemented.