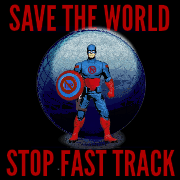 Next week will be critical for working Americans. President Obama will hold crunch meetings in Asia to try to finalize the Trans-Pacific Partnership -- a corporate power grab that will kill jobs, lower your standard of living, create national security risks, undermine environmental protections, do away with food safety standards and weaken your democratic rights.

This is urgent: They’re trying to nail down this deal right now under cover of extreme secrecy, with citizens and public interest groups excluded from the talks. Meanwhile, at home an army of lobbyists are trying to ram through a fast track law that would force the TPP through the U.S. Congress without a public debate.


The Teamsters are joining the biggest ever international campaign against the excessive secrecy surrounding the TPP. The last thing we need is politicians pulling a fast one on American workers with Fast Track legislation that locks us into a trade deal before Congress has even seen it. We're doing our best to stop them, but we need your help. Can we count on your support to tell decision-makers to reject Fast Track?

They’re pulling out all the stops to finalize this deal in secret talks -- but Teamsters, union members and workers around the globe are speaking out and fighting back. We’re calling for negotiators to end the secrecy by immediately releasing the full text of the TPP so that it can be debated democratically by the public.

The campaign will use a high-powered spotlight to beam a hard-hitting Stop the Secrecy message on key buildings in Washington, D.C. This signal will get larger and larger as more people sign petitions being circulated.

The more who support us the more powerful our voice will be. That’s why we’re urging you to join hundreds of thousands speaking out here.

The stakes could not be higher. Please, join us and speak out now before it’s too late.

Another way you can join the fight is to host a rally in your city, or participate in an event already planned. The list of events is here.

Stay tuned. We'll have more information as developments unfold.
Posted by Teamster Power at 11:24 AM