After Katrina: the power of 1.4 million helping hands

In the final installment of our week-long coverage of Hurricane Katrina on the 10th anniversary of the disaster, today's post looks at Teamsters around the country who donated their time, resources and even their holidays to help those affected by the storm. From New England to the New Mexico, Teamsters from numerous locals donated and drove supplies by the truckload to Gulf Coast communities. 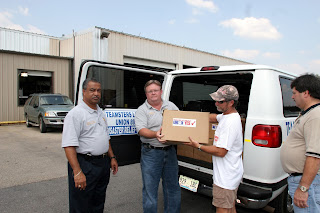 It didn’t take Teamsters long to respond to Hurricane Katrina. Within ten days after the worst natural disaster in United States’ history, Teamsters from across the country had come from all over with semi tractor-trailers -- filled to the brim with bottled water, emergency medical supplies, canned goods and school supplies to distribute to thousands of members living in hurricane- and flood-stricken areas.

A trio of UPS drivers from Local 597 in South Barre, Vermont ferried supplies more than 1,500 miles to sites in Jackson and Purvis, Mississippi. The drivers, Douglas Cleveland, Gary Dustin and Mark Gagnon, volunteered to go as part of “Operation Special Delivery,” an effort launched by Vermont Governor Jim Douglas.


We hung signs on our trucks that read, "From Vermont to Mississippi." People cheered us on by honking and waving at us all the way down.

The trucks contained more than 145,000 pounds of supplies amassed through donations, including essential goods such as water and even dog food. Once in Jackson, the supplies were quickly unloaded, repackaged on pallets and sent out to distribution sites in the worst-hit areas of the region.

There were a lot of trucks coming in, but the organization of the unloading process was something to see. We were joined by volunteers from all walks of life -- church members, school children and businessmen. It was wonderful to be able to help. We would all gladly do it again.

UPS driver Walter Mott from Local 492 in Albuquerque, New Mexico also helped in the relief efforts, driving a load of supplies to Baton Rouge, Louisiana to distribute to displaced hurricane victims from the New Orleans area:


I had concerns about what was going on in the Gulf, and I really wanted to help. I was born in Louisiana, and my family has a house in Galveston, Texas. I knew what they are going through.

In Boston, members from Local 25 collected and delivered supplies to Hattiesburg, Mississippi, donating a cargo trailer and community service trailer from the union's fleet to transport supplies to an area that received up to 100-mile-per-hour winds during the hurricane and had yet to be reached by the American Red Cross. The Local 25 tractor trailer, driven by volunteers Paul Newman and Rick Anderson, was loaded with mattresses, bedding, sheets, towels, and toiletries.

By December, trucks from Local 63 had made four cross-country trips to the hurricane-ravaged Gulf of Mexico. With the holiday’s approaching, a special trip was planned for Gulfport, Mississippi. Long after most service organizations and humanitarian efforts had left the Gulf, Team­sters from Local 63 pulled into Gulfport, driving a truck packed with bicycles, wrapped Christmas presents, and the jolly "Ho, Ho, Ho!" of Local 63's own Santa Claus (business agent Dallas Wimer):


So many of them came up to me, sat on my knee and told me that all they really wanted for Christmas was for their families to be safe. They wanted their old houses back, or their lost dogs. Most of all they wished the hurricanes hadn't happened.

Members of Local 891 helped unload the Teamster truck filled with presents from Local 63 families and exchange gifts, including more than 140 bicycles for the children of Local 891 members who had been affected by the storm. In the end, the children and their parents celebrated the Christmas they thought they wouldn't get.

Ten years later, Local 891 President Willie Smith still recalls the smiles on the faces of Local 891's children -- kids who thought their Christmas had been washed away with the floods, rain, and wind:

The looks of joy on those kids' faces were enough to lift the spirits of all our members. It meant so much to know that we can count on our fellow Teamsters in times of need. They could have celebrated the holidays with their own Christmas party, but instead they selflessly gave it up for the Teamster families of Local 891. 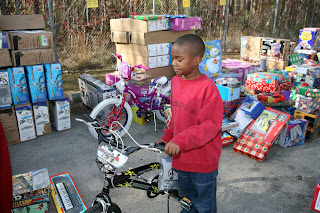 It should be noted that countless more Teamster locals and members also answered the call to help by donating to charities, collecting needed items and driving to the affected areas to assist their brothers and sisters in need.

As Teamsters, we are blessed and privileged to be part of a brotherhood that cares so deeply about its members.
Posted by Teamster Power at 4:24 PM