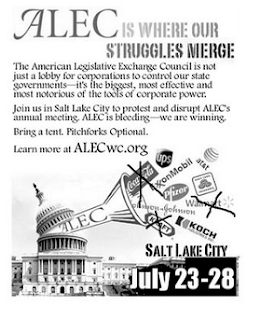 ...And the corporate bill mill responsible for so much middle-class misery will be met with a Parade of Empty Plates.

ALEC (the American Legislative Exchange Council) will hold its annual meeting July 23-28 in Salt Lake City. That's where state legislators get to meet their sugar daddies potential corporate donors (sometimes at taxpayer expense). The corporate donors get to meet lawmakers who will sponsor the bills they've written to help them get even richer.  That's where the "exchange" comes in. (We used to call it "pay to play.')

The ALEC Welcoming Committee explains about the plates:


While the ALEC Board of Directors eat in secret at their ‘by invitation only’ event,  the ALEC Welcoming Committee is holding its own alternative People’s Picnic and Unity Gathering, at Washington Square (City-County Bldg) July 23rd at 6 pm.,  and we invite you to attend.  ALECWC team members also plan a “Parade of Empty Plates” on the sidewalk just outside the Grand America followed by the picnic.

According to ALECWC, the “Parade of the Empty Plates” is designed to draw attention to the direct line between ALEC “inspired” model bills pushed through state legislatures and the “steady and devastating erosion of the standard of living for the middle class and poor.”

The American Legislative Exchange Council (ALEC) holds its annual meeting next week, July 23-27 in Salt Lake City to dish out more “pork” through 50 state legislatures to some of the Nation’s largest corporations, but more people are asking why there is no slice of pie for the poor and the middle class.


Take a long lunch and go make some noise.

Posted by Teamster Power at 1:25 PM